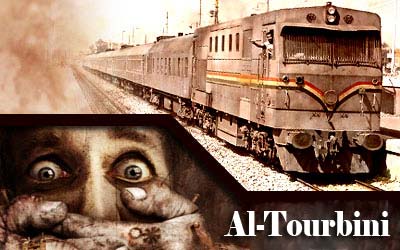 In the back streets of our cities lies another world we hardly know anything about, a dark world whose citizens are victims to poverty, unemployment, disintegration, and illegal relations. They are a community segment that is almost beyond the rule of law and government, but governed by the law of the jungle; it is not surprising that this entity is the home of crime and various manifestations of social deterioration.

Miserable childhood behind most criminal

Deprivation and chronic poverty were the reason why the family sent their child, Ramadan Abdel Rahman – born 1980 - to the street when he was 12 years old to work in one of the cafeterias of the Cairo railway station, to help the poor family survive. Ramadan bad luck made him fall prey to a bully called "Abdo" used to beat him and take the money he earns.

One day, "Ramadan" decided not to give in to this bully and refused to give him money, He also demanded that he return the money he had taken from him before. The reaction of this villain was violent and horrific. He dragged the child to the roof of a train and raped him, after finished, he threw him from the top of the train to fell on the iron bars, the boy didn’t die, but the incident caused severe injury to his head, strabismus in his right eye, a deep wound in the abdomen and left leg … and he stayed for a month in the hospital receiving treatment. As for the aggressor Abdo, he entered the prison, and after his release was killed in a car accident!

The crime of rape causes deep wounds in the psyche of "Ramadan", core wounds that not healed by the passage of time, brought him to the point of grief! To the point of isolation and introversion! To the extent of thinking about suicide

As the years passed, this turbulent situation within Ramadan turned into a motive for retaliation against a society that failed in protecting his dignity. He wanted to respond to the slap he had taken as a child in the same way that happened to him … Through the rape and torture of children!.

Leader of the children's gang

Ramadan turned into a criminal, led a gang of teenagers and children boys, and managed to impose his authority on the world of street children, collecting money from young beggars by force. The members of his gang were carrying nicknames in the language of the streets: "Hanata - Swissy - Bouzza - Buqo - the butcher"

One of the main tasks of Ramadan gang was to bring homeless children to the roof of the train on the pretext of free excursion. Ramadan was hiding on the roof waiting for them, and as soon as the children fall into the trap, Ramadan comes out and shackles them, then raped them. When he ends, he throws the children from the top of the moving train, they fall on the railway line and are seriously injured, and the coming trains could not see them in the dark until it's too late, trampling them, torn their bodies, cut off their heads, and some of them were crushed to the point that their bones were mixed with flesh and their faces features disappeared!! ..

Ramadan enjoyed raping and torturing children and cutting parts of their bodies with a knife before killing them, he didn’t have mercy on their tears. They begged for their lives, they kissed his shoes to leave them, but that make him felt more euphoric, prompting him to torture them more! … All this happen while the rich and high-class people sat on the luxury train seats in an air-conditioned atmosphere enjoying snacks and cold and hot drinks, over their heads, no more than one meter, the worst crimes of rape and murder were committed… What a paradox!!

Members of the gang gave their leader Ramadan the nickname “al-Tourbini" because of the Spanish turbo train that he liked to sit on, because there was a car in this train for air conditioners which is lower than the rest of the cars, enabling him to rape and kill his victims without being felt or seen by anyone.

Al-Tourbini crimes were not confined to the train stations. On one dark night, one of the beggars, Mohammed Kamal, entered one of the metro tunnels to spend his miserable night. But the treacherous fate had brought Al-Tourbini and his gang to spend time in that same tunnel. They grabbed the boy and took what was in his pocket ... a few pounds ... Then Al-Tourbini asked his gang to rape the boy, and after they finished, he ordered them to go out and leave him alone with the boy, he raped him, then he grabbed a large stone and smashed his head and didn't leave him only after confirmed he is died, then they buried him in the tunnel

Once, Al- Tourbini wanted to rape a member of his gang, Ahmad Naji. The boy felt frightened, perhaps because he knew that death would be waiting for him after the rape. So he had no way to survive except to go to the police and tell them about the crimes of the gang.

The police arrested Al- Tourbini and briefly jailed him for sexually assaulting a child.

Upon his release from prison, Al- Tourbini asked his gang to intensify the search for Ahmed Naji and bring him back. The gang succeeded in finding Ahmed and luring him to one of the train stores. The boy was horrified when saw Al- Tourbini, tried to escape, but the trap was tight. Al- Tourbini ordered his gang to "celebrate", which means to rape the boy!! … They raped the boy for three hours until he start bleeding!! After that, Al- Tourbini tied his hands and mouth, blindfold him, and then carried him on his shoulder up to the surface of an abandoned water tank, which was 30 meters high, and threw him to the ground. He died instantly.

The fall of the gang

A maintenance worker accidentally found a skeleton belonging to a child in the tunnels of the Shubra al-Khaima metro station north of Cairo. A few days later the body of a second child was found on the railway track in Alexandria, and shortly afterwards they found the body of a third child at the Tanta railway station ... After a thorough inspection and search of those places, police found "twelve" another corpse belongs to children.

The event shook the pillars of Egyptian society! ... Stimulated all state organs, police, criminal research experts, professors of psychology and sociology! ... And the media and newspapers! Families prevented their children from going to the street or going to school. Satellite channels began discusses the details of the crime, and talk shows began to highlight the issue of street children.

The case caused great embarrassment to officials in the Ministry of the Interior, Thus, the police used all their capabilities to follow up the case and expose its dimensions. Thousands of policemen and criminal investigation were recruited to pursuit the perpetrators in the provinces where the crime took place and large-scale arrests were launched on all places where beggars, homeless people, drug depots and prostitutes were found.

Among the arrested was one of the gang members, "Ahmed Samir" - 16 years - known as "Buqo" ... He was running away from Al- Tourbini, because the latter was seeking to kill him, after he discovered his sexual relationship with "Azza Barbash," which was secretly married to Al- Tourbini.

When he was taken to the investigation, he asked the officer to protect him from the gang leader who was stalking him to kill him. When the officer asked him why? … Buqo spoke at length and acknowledged some interesting details about the mafia of street children, and how they rape and kill other children. He told the police about the gang member's names, and guides them to where they can find them. This was the first thread that led the police to arrest the gang members one by one and later managed to catch Al- Tourbini after the erection of several ambushes in places frequented by.

Ramadan stood before the prosecution and investigators. He talked about how he raped and killed the children, and stressed that he has special specifications in children, the most important that his age is not more than twelve years old, a specification known to all members of his gang when they offer a child to him. Perhaps his insistence on this age stems from the psychological node that accompanied him throughout his life because of his rape at the same age.

He admitted that he had no sense of guilt when he killed the children after they were raped, he did not feel sympathy for any of them. Rape and murder have become routine for him, he no longer knows the number of his victims and no longer cares.

Police investigations, confessions of Al- Tourbini and his gang led to the discovery of 17 other bodies, bringing the total victims to 32. Thus, Al- Tourbini has become the most serial killer in Egypt in terms of known victims.

Al- Tourbini trial was not long; he was quickly sentenced to death with his assistant Hanata. The other members of the gang received long prison terms and were placed in juvenile prison because of their young age.

Three years later, on Thursday morning, December 16, 2010, Al- Tourbini and his assistant Hanatah were taken to the execution chamber. Their faces were pale, trembling, and when they asked Al- Tourbini if there was anything he wanted to say, he replied that he had nothing to say. They put the rope around his neck, and a few minutes later his dead body was swinging from the gallows.

Al- Tourbini have finally gone, but the streets have not become safer. Unless the problem of street children is solved radically, unless the problems of poverty, slums and ignorance are resolved … there will be more and more Al- Tourbini in our streets in the future.